Butts Out Norfolk: Cigarettes Are Litter Too 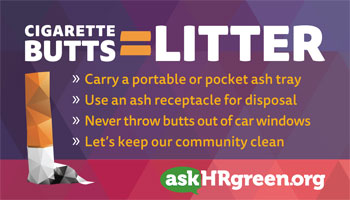 In just one day, over 568 cigarette butts were collected in just 2 city blocks of Norfolk!

How You Can Help

Keep Norfolk Beautiful participated in Keep America Beautiful's (KAB) regional pilot campaign, "Cigarette butts = litter," which aimed at reducing the impact of cigarette litter throughout the region. The eight-week program began July 1, 2015 and was funded by a $12,500 KAB grant. Norfolk joined six other Hampton Roads municipalities, who each share the goal of reducing the impact of cigarette butt litter throughout the region. Learn More