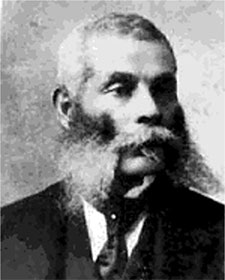 Sergeant Boyne was born in 1849 and entered the service in Norfolk. He was assigned to Company "C", 9th U.S. Cavalry in 1879. SGT Boyne served as a Buffalo Soldier in the U.S. Army and was awarded the Medal of Honor for his actions in the Indian Wars of the western United States.

In 1879, Boyne was serving as a Sergeant in Company C of the 9th Cavalry Regiment In New Mexico. He was cited for "bravery in action" at the Mimbres Mountains on May 29, 1879, and at the Cuchillo Negro River near Ojo Caliente on September 27, 1879. Major Albert P. Morrow stated, "I have seen him repeatedly in action and in every instance he distinguished himself." Major Morrow also wrote that I cannot speak too highly of his conduct" and expressed the belief that "if any soldier ever deserved a Medal of Honor Sergeant Boyne does and I hope he may be so rewarded.

Sergeant Boyne retired from the Army in 1889, died on April 21, 1896, and was buried at the Soldiers' and Airmen's Home National Cemetery in Washington, D.C.