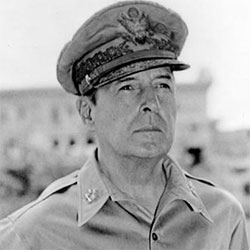 Douglas MacArthur was the son of Civil War Medal of Honor recipient, Arthur MacArthur and Mary Hardy of Norfolk.

As Commanding General of the U.S. Army Forces in the Far East, General MacArthur demonstrated conspicuous leadership in preparing the Philippine Islands to resist conquest by demonstrating gallantry and intrepidity above and beyond the call of duty in action against invading Japanese forces and for the heroic conduct of Defensive and Offensive operations on the Bataan Peninsula.

His utter disregard of personal danger and calm judgment inspired his forces, and galvanized the spirit of resistance of the Filipino people, and confirmed the faith of the American people in their Armed Forces.