Norfolk adopted the mermaid as its symbol in 1999, following the suggestion of longtime Norfolk attorney and philanthropist Pete "Uncle Pete" Decker. He credited his wife, Bess, with the idea, who drew inspiration from Chicago's "Cows on Parade" campaign.

The original mermaid design launched a campaign that led to a sea of sculptures, each based on a template created by a local sculptor and customized by local artists and businesses. She also swam onto city communications, with mermaids featured on letterhead, business cards, and program logos.

Over time, the mermaid morphed into hundreds of variations in city communications and documents – different parts of her body, different colors, different type faces. These variations lessened her impact as a symbol of the City of Norfolk.

In 2015, the City of Norfolk undertook a citywide communications audit, identifying and assessing how the mermaid was used in every department and city program. Guided by this information, we sought to refresh the image and create parameters for use of the symbol on official city communications.

The study concluded that the mermaid should help support the City of Norfolk's overall branding message: prime waterfront location; focus on resilience; a fun, community-oriented, approachable personality; a contemporary, progressive and hip image. She should also work for the city across all applications and across departments, programs and initiatives. Finally, the city would be able to leverage nearly 20 years of equity in the mermaid mascot. 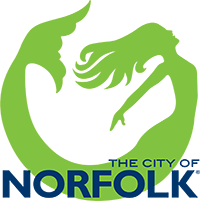