These notices shall satisfy two separate but related procedural requirements for activities to be undertaken by the City of Norfolk.

REQUEST FOR RELEASE OF FUNDS

On or about July 28, 2021 the City of Norfolk will authorize Norfolk Redevelopment and Housing Authority to submit a request to the U.S. Department of Housing and Urban Development (HUD), Richmond Field Office, Public and Indian Housing Program Center for the release of Project-Based Housing Choice Vouchers under Section 8(o) of the U.S. Housing Act of 1937. The proposed project, Riverside Station Apartments, is to be located at 5827 and 5845 Curlew Drive and 5786 Sellger Drive in Norfolk, Virginia. The proposed apartment community is planned for 236 mixed-income units in seven 3 and 4 story buildings on an overall 9.88-acre site. Additionally, site amenities include a pool, clubhouse with lavatories, fitness center, bicycle workshop and storage, along with associated greenspace. Twenty-three (23) units will be using project-based vouchers. The estimated value of the vouchers is $3,770,550, with a total estimated project cost of $47,480,626.

FINDING OF NO SIGNIFICANT IMPACT

The City of Norfolk has determined that the project will have no significant impact on the human environment.  Therefore, an Environmental Impact Statement under the National Environmental Policy Act of 1969 (NEPA) is not required.  Additional project information is contained in the Environmental Review Record (ERR) on file at the City of Norfolk Department of Budget and Strategic Planning, 810 Union Street Suite 607, Norfolk, VA 23510, and at www.norfolk.gov/hudentitlement. Requests for copies must be made to Megan Erwin via e-mail at HUDEntitlement@norfolk.gov or via telephone at 757-664-4257. Readers with internet access can also access the record for review and copy from the HUD Exchange: https://www.hudexchange.info/programs/environmental-review/environmental-review-records/.

HUD determined that a regulatory violation of 24 CFR 58.22(a) occurred with respect to the Riverside Station Apartments. The following action occurred: Curlew Apts. I, LP, purchased the property from the seller The Franklin Johnston Group Management & Development, LLC, on December 21, 2020 with non-HUD funds.   This purchase occurred after the application for HUD Project Based Vouchers (PBV), but prior to the March 3, 2021 submission of the Request for Release of Funds (RROF) and before receiving the Authority to Use Grant Funds. As a result of this violation the Environmental Review has been amended and is available for public comment.

To avoid future occurrences, the recipient and project partners (including public or private nonprofit or for-profit entities, contractors, and subcontractors) have immediately ceased all choice limiting actions (CLAs) and will not acquire, rehabilitate, demolish, convert, lease, repair, or construct property, nor expend HUD or any non-HUD funds for these project activities until the release of funds have been granted. In addition, the regulation language has been included in the Developer’s orientation for vendors doing business with NRHA. NRHA will implement a compliance check throughout the environmental review process. The updated Environmental Review Record also includes the following new mitigation measures:

Worker safety must be addressed through the design and implementation of a site-specific health and safety plan (HASP) by an industrial hygienist that will take into consideration construction worker safety risks through exposure to volatile organic compounds (VOCs) and petroleum hydrocarbons. Implementation of the HASP will include ambient air monitoring for excessive vapor phase concentrations that would warrant the usage of appropriate personal protective equipment.

The recreation center for the Riverside Station complex will have a sub-slab depressurization system (SSDS) installed beneath the foundation slab to mitigate the potential for vapor intrusion and indoor air risks to future occupants. The SSDS will be designed for initial passive operation with the ability for conversion to an active system. The foundation pad for the recreation center should likewise be fitted with a minimum 15-mil thick sub-slab vapor barrier of compatible construction to overlie the vapor mitigation system piping.

The foundation slabs for Buildings 1, 2 and 3 of Riverside Station will be fitted with a minimum 15-mil thick sub-slab vapor barrier of compatible construction to minimize any potential vapor risks to future residents.

Petroleum contaminated soil will be effectively managed by the site-specific soil management plan that has been prepared for the project.

Any individual, group, or agency may submit written comments on the ERR to the Department of Budget and Strategic Planning. All comments received by July 27, 2021 will be considered by the City of Norfolk prior to authorizing submission of a request for release of funds. Comments should specify which Notice they are addressing.

The City of Norfolk certifies to HUD that Dr. Larry H Filer II, in his capacity as City Manager consents to accept the jurisdiction of the Federal Courts if an action is brought to enforce responsibilities in relation to the environmental review process and that these responsibilities have been satisfied.  HUD’s approval of the certification satisfies its responsibilities under NEPA and related laws and authorities and allows NRHA to use Program funds.

OBJECTIONS TO RELEASE OF FUNDS

HUD will accept objections to its release of fund and the City of Norfolk’s certification for a period of fifteen days following the anticipated submission date or its actual receipt of the request (whichever is later) only if they are on one of the following bases: (a) the certification was not executed by the Certifying Officer of the City of Norfolk; (b) the City of Norfolk has omitted a step or failed to make a decision or finding required by HUD regulations at 24 CFR part 58; (c) the grant recipient or other participants in the development process have committed funds, incurred costs or undertaken activities not authorized by 24 CFR Part 58 before approval of a release of funds by HUD; or (d) another Federal agency acting pursuant to 40 CFR Part 1504 has submitted a written finding that the project is unsatisfactory from the standpoint of environmental quality.  Objections must be prepared and submitted in accordance with the required procedures (24 CFR Part 58, Sec. 58.76) and shall be submitted via email to Mr. Robert Davenport, Director, HUD Richmond Public, and Indian Housing Program Center (PIHPC) at robert.f.davenport@hud.gov .  Potential objectors should contact the HUD Richmond PIHPC at (800) 842-2610, Extension 4899 to verify the actual last day of the objection period. 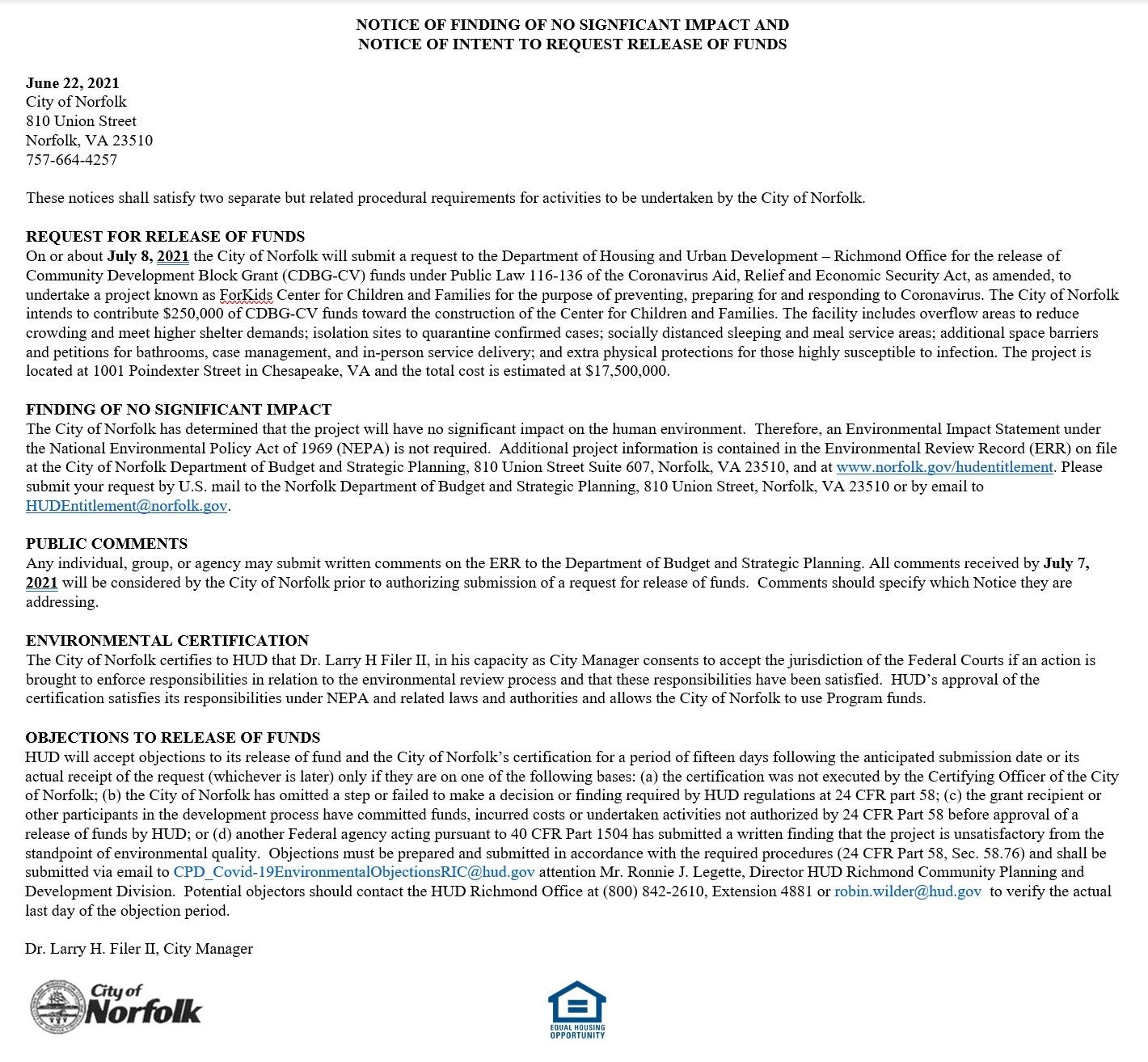 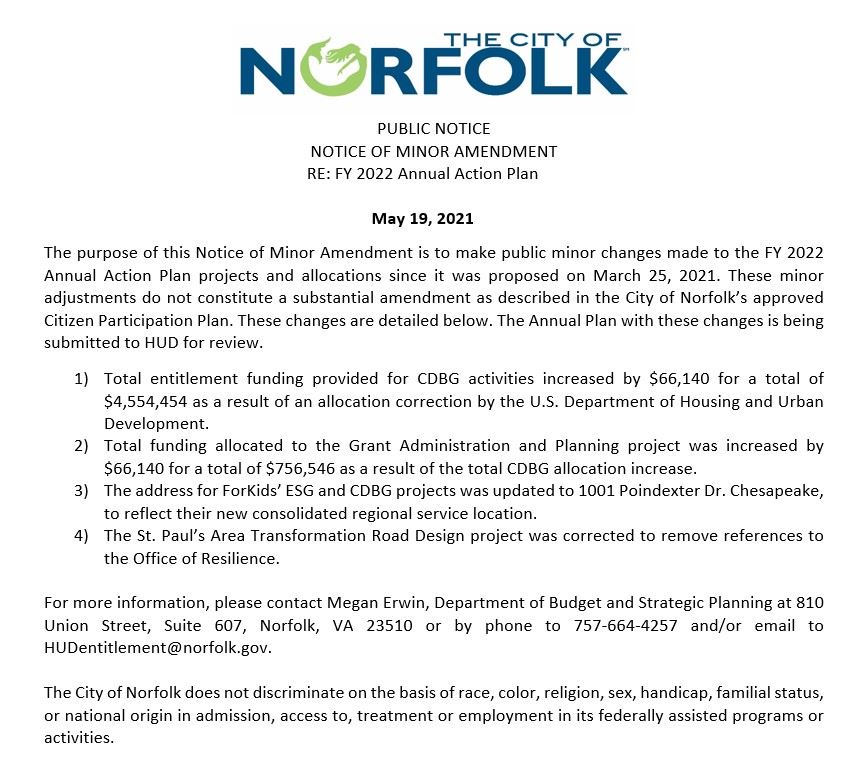