What is the Transit System Redesign?

Multimodal Norfolk will include a full redesign of the City’s public transportation system that will evaluate and recommend important policy related to transit funding and stop spacing. The City will examine innovative options to deliver transit service, including micro-transit and other on-demand solutions that will best serve the needs of the City.

The new network would have major benefits for most people in Norfolk:

Read more about the Draft Recommended Network below. 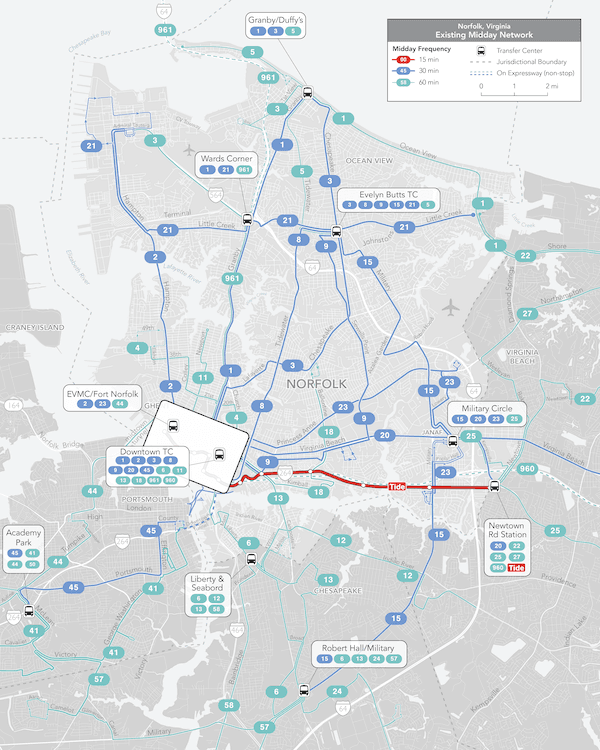 This is a map of the existing Norfolk transit network.

People are more likely to use frequent service (red lines) because a bus or train is usually coming soon. These lines typically offer better night and weekend service, which makes it easier for people to use the bus for all sorts of activities.

But the only frequent line during midday is The Tide. Most routes come every 30 or 60 minutes during the day on weekdays. Some routes come more frequently during rush hour. For more detail, you can download a larger map or read our Concepts Report (PDF) to learn more about the existing network. 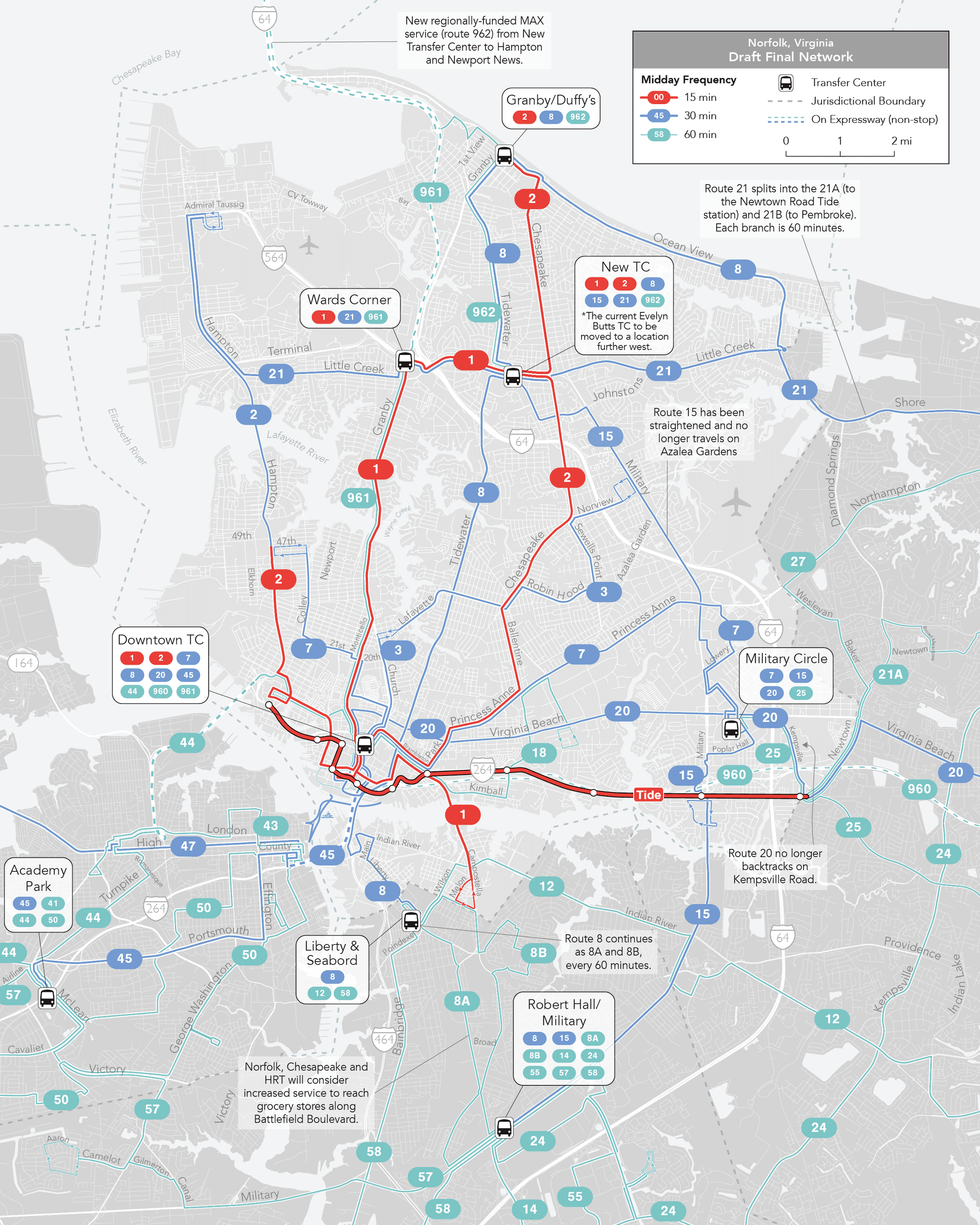 This is a map of the Draft Recommended Network for Norfolk.

Compared to the Existing Network, there are far more frequent routes covering many more neighborhoods and key destinations

People are more likely to use frequent service (red lines) because a bus or train is usually coming soon. These lines typically offer better night and weekend service, which makes it easier for people to use the bus for all sorts of activities.

A key way that the Draft Recommended Network improves access is by making it easier for transit riders to reach downtown, including places like MacArthur Center, Tidewater Community College, and cultural destinations. The maps below compare the Existing Downtown Network and the Draft Recommended Transit Network. In the Existing Network, few bus routes come into the core of downtown, leaving many transit riders a long walk from major destinations. 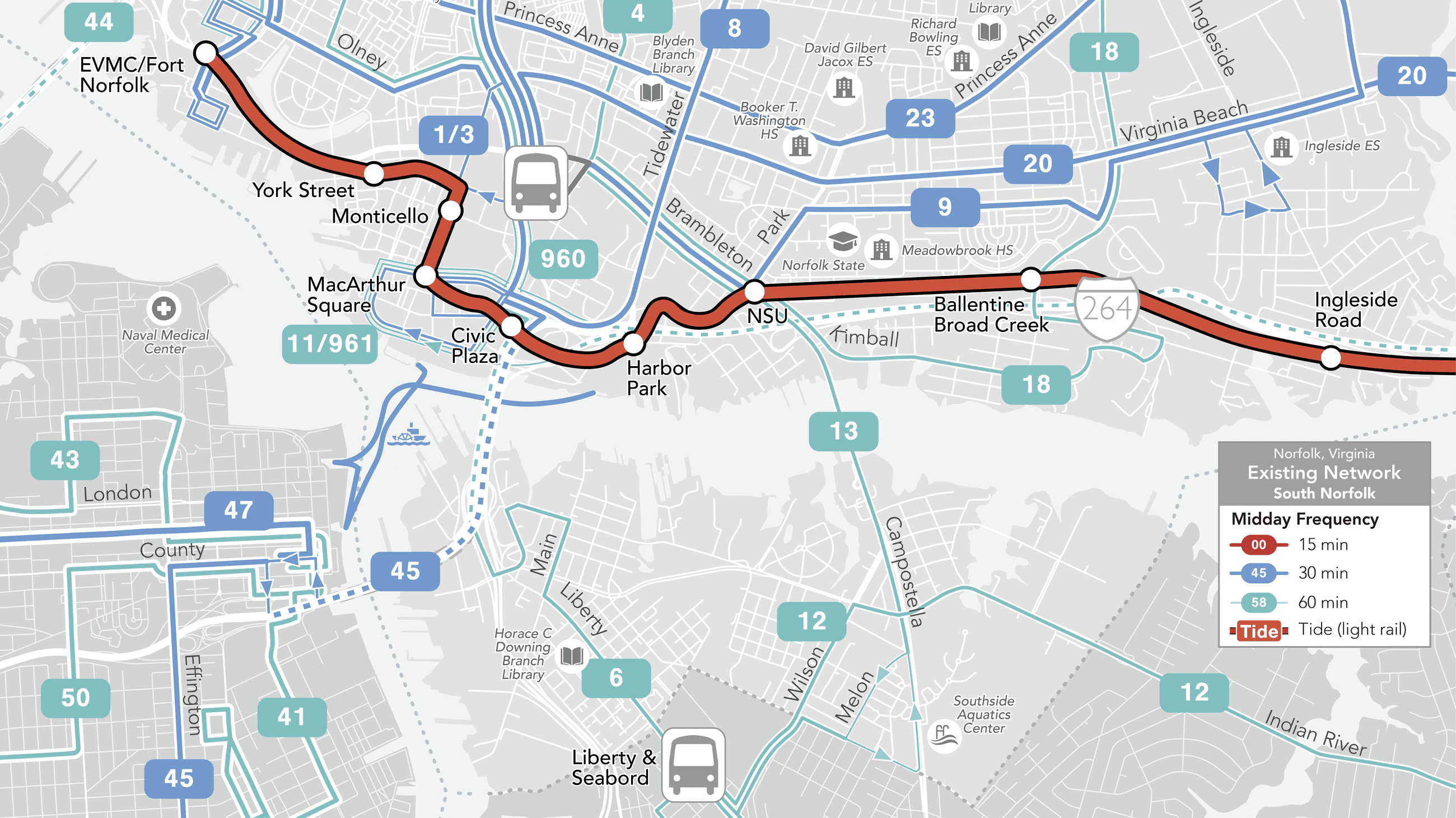 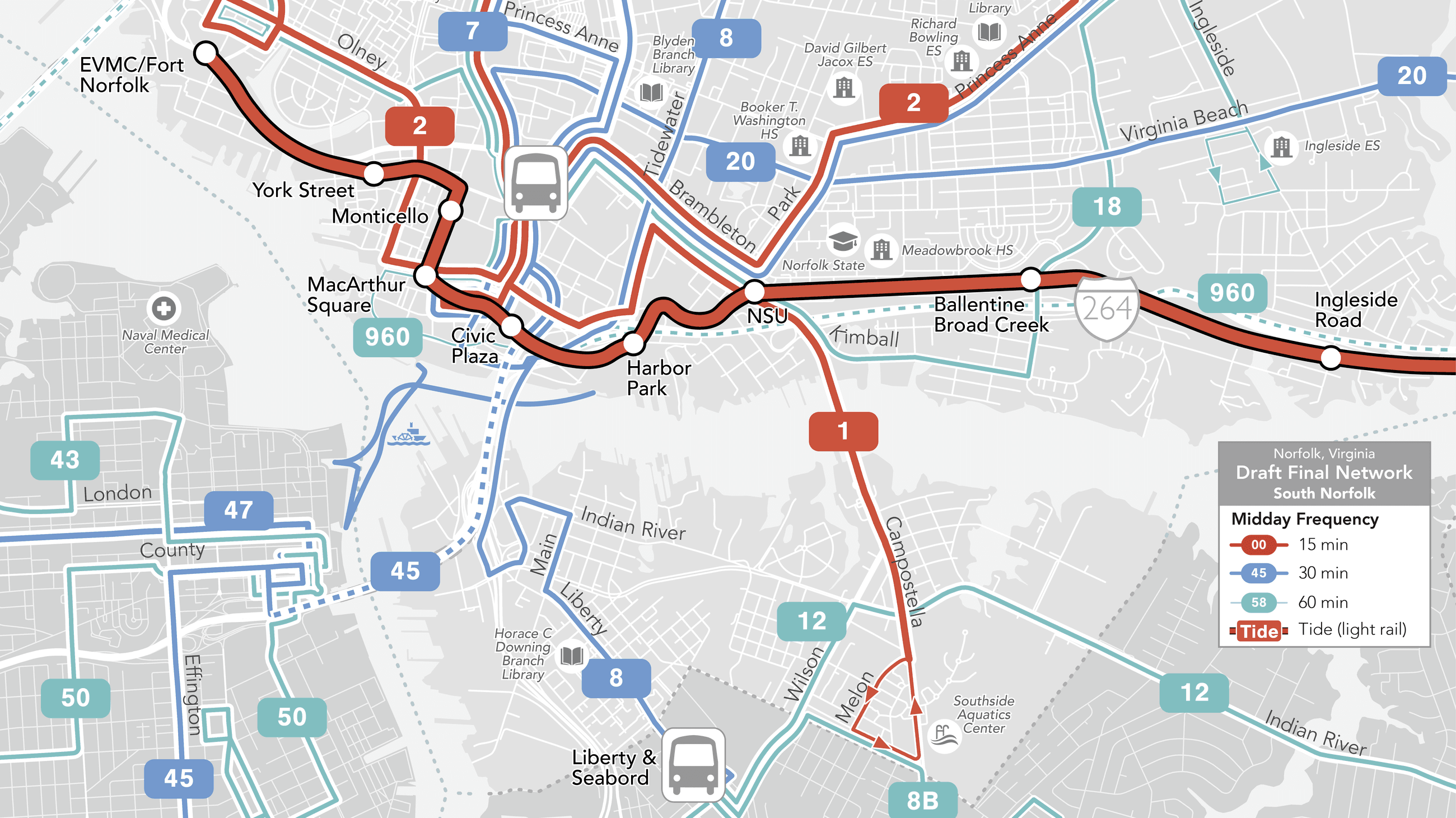 The Draft Recommended Network brings more routes through downtown so that transit riders have easier access to all the jobs, shopping, and opportunities available within downtown Norfolk. This makes the many riches of downtown accessible to far more transit riders across the city, and it is part of the reason that 63,000 more residents could reach MacArthur Square by transit and walking in 45 minutes with this new network. That’s an 80% increase in residents who can reach the core of downtown.

The new network also through-routes buses, so that more riders can make trips across the city without having to transfer. For example, someone coming from Norview on the new Route 2 could ride directly through downtown to reach Old Dominion University on Hampton Boulevard. Similarly, someone coming from Campostella and wanting to go to Bon Secours Depaul Medical Center, could ride through downtown without transferring.