EMERGENCY ALERT City of Norfolk Offices to Close Due to Inclement Weather Read On...

We are nearing the end of the Project Development effort and will soon be going to City Council for a vote. If Council votes in favor of accepting the SMART Scale funding, the project will move into the Design Phase.

The City of Norfolk Department of Transit is developing a
potential project to implement bike lanes on Granby Street between Willow Wood Drive and Admiral Taussig Boulevard
(just south of the I-564 overpass) by repurposing a vehicle lane in each direction into bike lanes. To learn more about this
project development effort, please check out:

The next steps in the Project Development Effort are as follows:

The first round of public outreach for this project development effort consisted of a virtual workshop held on March 11, 2021 and an online survey that was open between March 11 and April 13, 2021.

The second virtual workshop was held on June 29, 2021 to gather public input on the traffic study results and design concepts developed based on the first round of public input. The second public comment period was open until October 22, 2021.

The final round of public outreach consisted of an in-person open house to allow residents and community members to discuss the proposed Granby Street Bike Lanes with City of Norfolk representatives. This event was held at the Blessed Sacrament Catholic Church on Newport Avenue on September 22, 2021. The project team also attended civic league and task force meetings in August, September, and October to provide updates on the project and answer questions from residents.

Project updates are sent by email to all workshop registrants and upon request to individuals. Contact us to request email updates. Updates are also posted on this webpage and official City of Norfolk social media platforms (Facebook, Twitter, NextDoor).

Click here to submit questions or comments to the project team. 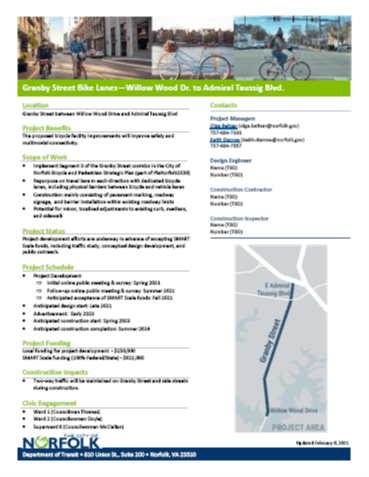 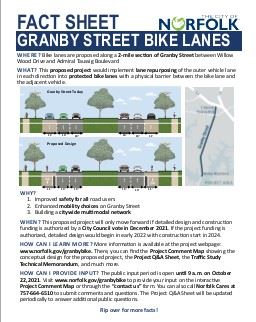