In this plan, the City of Norfolk will receive $399,331,000 to increase community resilience to flooding. The city will use the funding for the design and construction of storm surge barriers, levees, and pump stations to reduce storm risk as part of a large-scale extension of the Downtown Norfolk Floodwall.

“The City of Norfolk has been hard at work, leading the way on coastal resilience and adaptation. This funding will allow us to extend our downtown floodwall, ensuring the ongoing safety and prosperity of our residents and businesses,” said Norfolk Mayor Kenneth Cooper Alexander, Ph.D. “I want to thank our congressional delegation for their unwavering support of our efforts. I also want to thank our city manager and city staff for their work to bring this project to fruition. We look forward to working with the Army Corps of Engineers to make Norfolk a more resilient city now and into the future.”

The federal funding allocation for developing complete plans and specifications for extension northwards to the Midtown Tunnel and west towards the Campostella Bridge as well as a floodgate at the Hague.

“For more than a decade, Norfolk has recognized that flooding is a threat to the economic vitality and livability of the city and must be addressed. This funding provides the opportunity to implement the projects staff have proposed to protect and mitigate the impact of flooding events on the City’s commercial core and growing residential population while also extending beyond the downtown area,” states Norfolk’s City Manager, Dr. Larry “Chip” Filer.

The City of Norfolk and the US Army Corps of Engineers Norfolk District began the Norfolk Coastal Storm Risk Management Final Integrated Feasibility Report and Environmental Impact Statement in 2016, with the Chief of Engineer’s Report completed in February 2019. The project was authorized by congress in the bipartisan Water Resources Development Act of 2020.

The Downtown Norfolk Floodwall protects from flooding occurring in the adjacent Elizabeth River and forms the backbone for current and future protection. The existing wall was completed in 1971 by the United States Army Corps of Engineers and affords the city’s downtown area a reduced flood insurance rate by accreditation from the Federal Emergency Management Agency (FEMA) due to the protection that it provides. 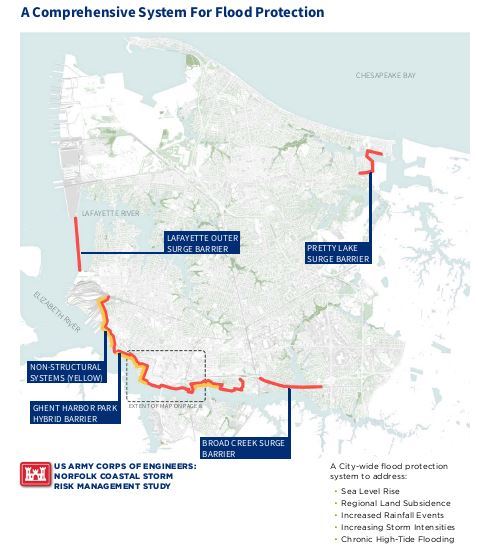 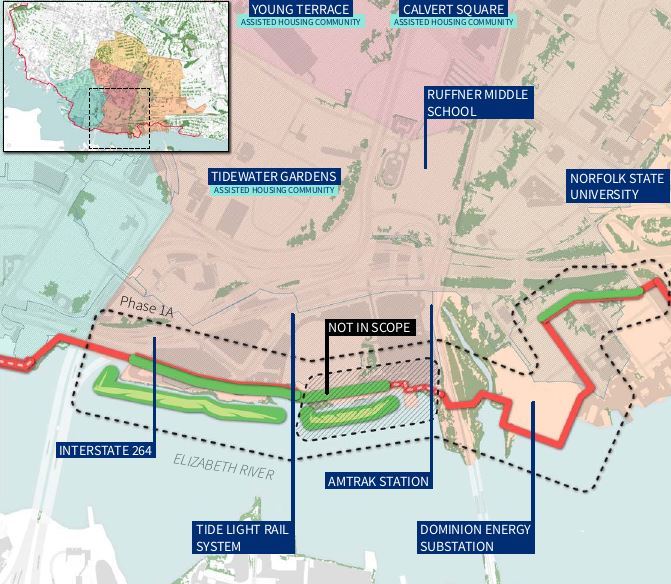