The Integrated Public Alert & Warning System (IPAWS) is FEMA's national system for local alerting that provides authenticated emergency and life-saving information to the public through mobile phones using Wireless Emergency Alerts, radio, and television via the Emergency Alert System, and on the National Oceanic and Atmospheric Administration's Weather Radio.
Local jurisdictions have to be certified as an Alerting Authority to be granted access to the IPAWS system. The City of Norfolk has been IPAWS Certified since 2013. Currently, there are over 1,600 certified IPAWS alerting authorities Nationwide.

What is a Wireless Emergency Alert?

Wireless Emergency Alerts, or WEA, are sent through IPAWS, such as Amber Alerts and Weather Warnings. In the City of Norfolk, this is the primary system we use to alert the community of emergencies that are:

These messages are sent using the cellular service towers to alert phones and some other capable devices like sign boards, smartwatches, tablets, and other services that communicate with the cell towers. Most people will receive these alerts using modern WEA-capable cell phones.  More devices are being developed that can use wireless emergency alerts even if they are not cell phones.

Depending upon the phone carrier's network, the message that accompanies an attention-getting tone may be limited to either 360 characters or 90 characters. Those receiving an alert are encouraged to tune into broadcast stations for more information.

How Do I Get Alerts?

The primary way we use this system is to send the WEAs to modern cell phones. Many phones can be alerted and can call out to 9-1-1, even if they do not have active paid service. In any case, the device needs to be turned on and communicate with a cellular tower.  Furthermore, the settings for receiving an alert must be turned on. This is how you "sign-up" to get these types of alerts. 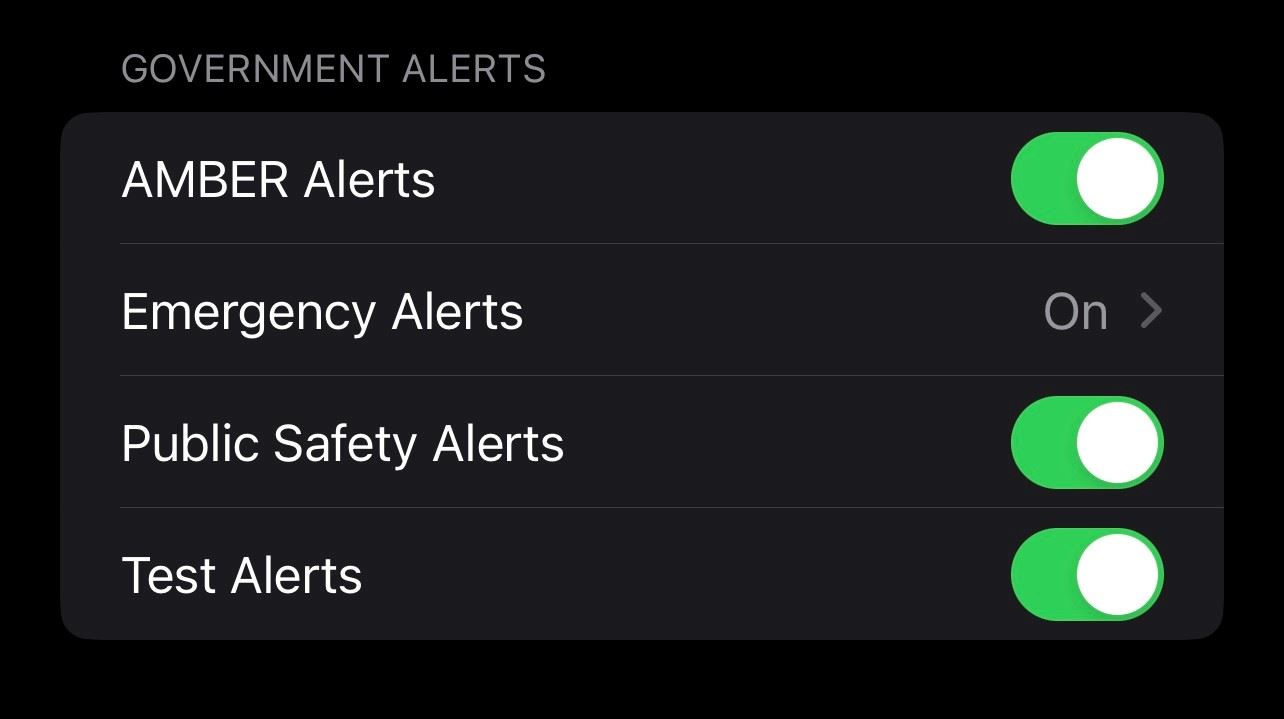 When we send out an alert, we define the area that is to be alerted. We will usually make the area as big as possible to make sure we alert those who are not only in the area of danger but also those moving toward it. Most disasters will result in us alerting the entire City unless it doesn't make sense to do so. When your device enters the alert area identified, and if WEA is enabled, you will receive the emergency alert.

Are There Times I Might Not Get the Alert?

Yes. The following situations might cause you not to receive the WEA on your mobile device.

Do I Have to Be on My Carriers Network?

No. WEA is enabled to roam onto your carriers' competitor's towers.

If I Travel Away from The City of Norfolk, Will I Get an Alert?

No, not from the City of Norfolk; however, because WEAs are based upon geographical cellular tower locations, you will only receive alerts while connected to a cell tower that was identified to receive the alert by the alerting agency.

As an example, if you live in Norfolk and you travel to Richmond, you will get emergency alerts if Richmond sends one out. While you are there if we send an alert out regarding an incident in your neighborhood you will not receive the alert (because your device isn't physically in the alert zone).

If you want to receive alerts for locations in the City of Norfolk while you are not here, like for your home, work, school, or a family member's house; then sign up for Norfolk Alert. It will alert your device to let you know of an incident, even if you aren't there. This is one of the major reasons we encourage everyone to sign up for Norfolk Alert and enable WEA on their phones. They complement each other well and serve as a backup to each other because they use different technologies to get alerts to you.

Does the City of Norfolk Conduct Live WEA Test Messages?

Yes, beginning January 2023, we will test the WEA system monthly to a predetermined WEA Testing Zone in the City of Norfolk. Below is the schedule for each month by WEA Testing Zones. Click on the interactive map to locate the zone that corresponds with the month indicated in the table. 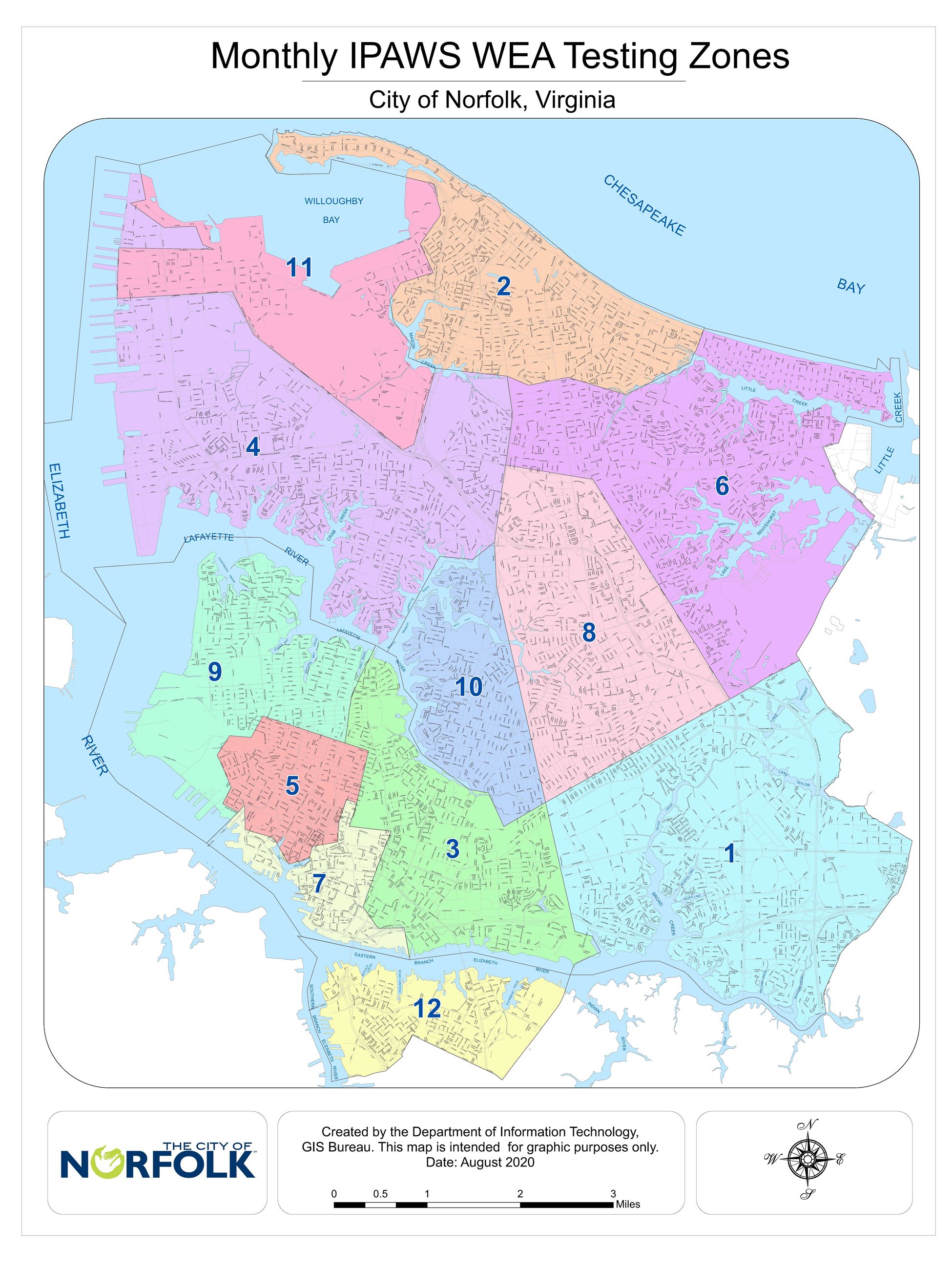 Here is the Test Message that will be generated monthly, depending on if your mobile device can receive 360 or 90-character Emergency Alert Messages:

360 Characters - TEST- The City of Norfolk is testing its Wireless Emergency Alerts. This message confirms that your phone can receive emergency alerts. In an actual emergency, this system would be used to share potentially life-saving information. No action is required as this is just a TEST. Visit https://arcg.is/0nKyrj to complete a survey regarding this TEST. END OF TEST

90 Characters - TEST: Norfolk is testing its Wireless Emergency Alerts. No Action is required. END OF TEST

Below, we are providing links to pages made by the major cell providers related to WEA as a convenience. We do not endorse any carrier's service over another. We are only providing these links as a matter of convenience to those representing the biggest portion of the consumer marketplace.