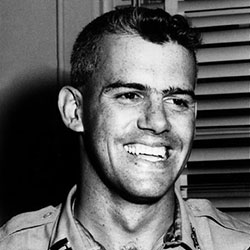 CPT Versace grew up in Alexandria, Virginia. After attending two years of high school there, his family moved and he graduated from Norfolk Catholic High School. He joined the Armed Forces in Norfolk, and attended West Point, graduating in 1959.

CPT Versace was awarded the Medal of Honor for action while a prisoner of war during the period of 29 October 1963 to 26 September 1965. CPT Versace assumed command of his fellow American prisoners, and despite being kept locked in irons in an isolation box, he raised their morale by singing messages to popular songs of the day and leaving inspiring messages at the latrine.

Despite the severity of his untreated wounds, he attempted the first of three escape attempts by dragging himself on his hands and knees out of the camp through the dense swamp. CPT Versace scorned the enemy's exhaustive interrogation and indoctrination efforts and inspired his fellow prisoners to resist to the best of their ability. The last time any of his fellow prisoners heard from him, CPT Versace was singing "God Bless America" at the top of his voice from his isolation box. Unable to break his indomitable will, CPT Versace was executed by the Viet Cong on 26 September 1965.