Slow down! This simple statement is echoed by many Norfolk residents. To address resident concerns and as part of its Vision Zero initiative, Norfolk’s Department of Transit is introducing a speed reduction program which will lower the speed limit on n

eighborhood streets to 20 miles per hour.

Norfolk City Council passed an ordinance on October 26th, 2021 that aligns with new state legislation that allows localities to slow speeds on local/neighborhood streets without requiring speed studies. The Department of Transit already identified priority areas throughout the city to establish an implementation plan.

At lower speeds, drivers have a wider field of view and are more likely to notice other road users, including pedestrians and bicyclists. This is especially important in neighborhoods where more people are walking, biking, scootering, or playing.

Nationally recognized as a new speed limit for neighborhood streets, 20 miles per hour accounts for people traveling in different ways and creates a safer roadway environment.

Several benefits result from lowering speed limits. 1) It saves lives. At lower speeds, even if a crash does occur, the consequences will be less severe. 2) It creates healthier communities. Lower speeds require less road space for vehicles and allow for more bike lanes and wider sidewalks. 3) It allows for human-scale development. Lower speeds create opportunities for safer street designs in the future that focus on human needs rather than vehicle needs.

Vision Zero is the city’s strategy to eliminate all pedestrian and bicycle fatalities and severe injuries, while increasing safety, mobility, and equity for all road users. The speed reduction program aligns with the city’s Vision Zero strategy to create safe streets for all users while improving street safety measures and managing speed.

Be sure to slow down, stay alert and share the road!

Our process for speed limit reductions

The map below on the left shows the Phase 1 priority areas. These groups of neighborhoods are based on task force. Many of these priority areas cover older parts of the city and are more densely populated. Areas shaded in gray on the map are more suburban and/or have different road characteristics. These areas will be considered in Phase 2 of the speed reduction program.

Effective March 1st, 2021, the Virginia General Assembly passed a bill that “authorizes local governing bodies to reduce the speed limit to less than 25 miles per hour, but not less than 15 miles per hour, in a business district or residence district” (House Bill No. 1903). This new bill will now allow localities to lower the speed limit on “local” VDOT classified streets without requiring speed studies. The map below on the right shows the VDOT road classification for all roads in the City of Norfolk. The “blue” streets are the local streets that DO NOT require speed studies to lower the speed limit. The higher-level streets (those in red, green, and orange) DO still require speed studies to determine if the speed limit can be reduced. 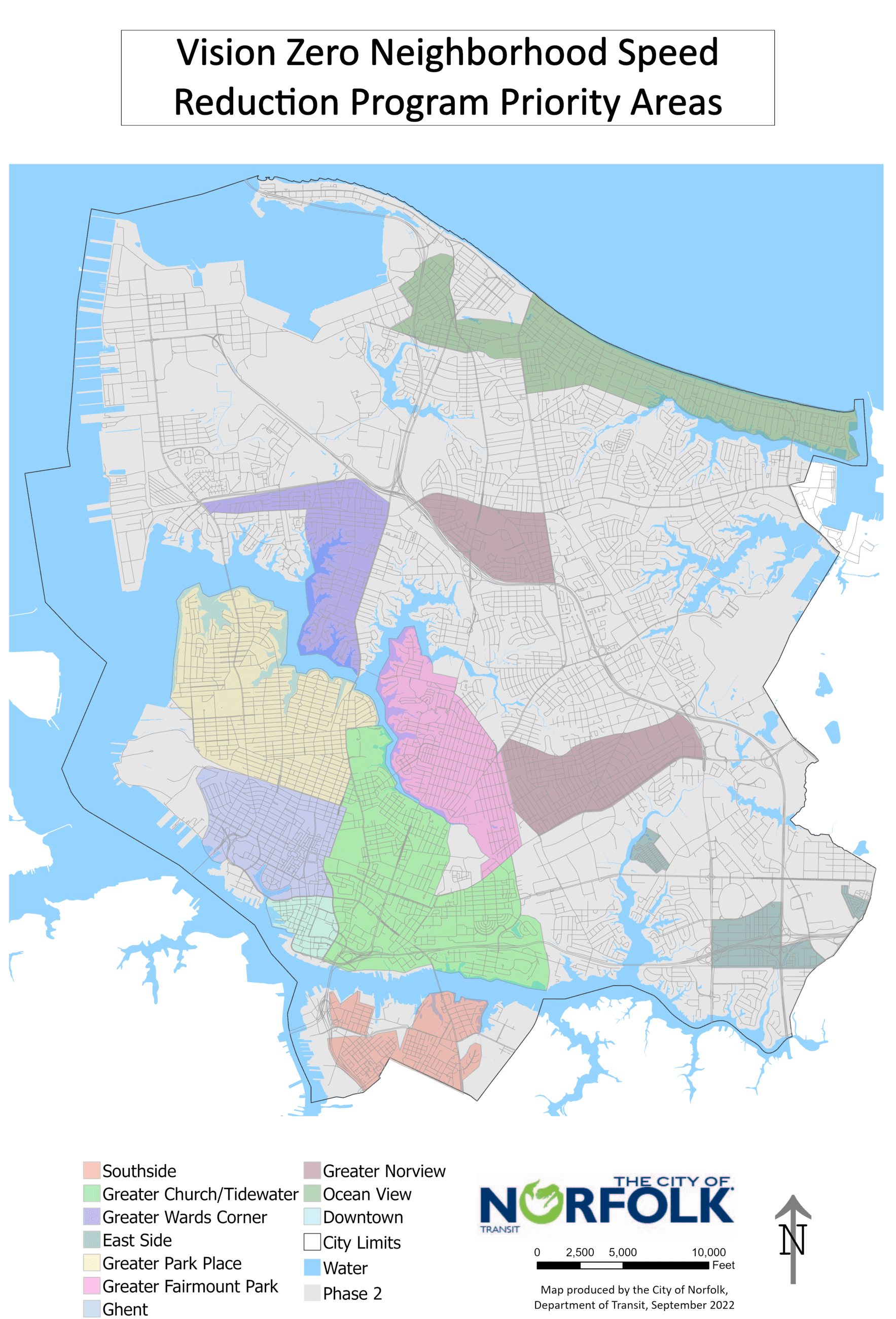 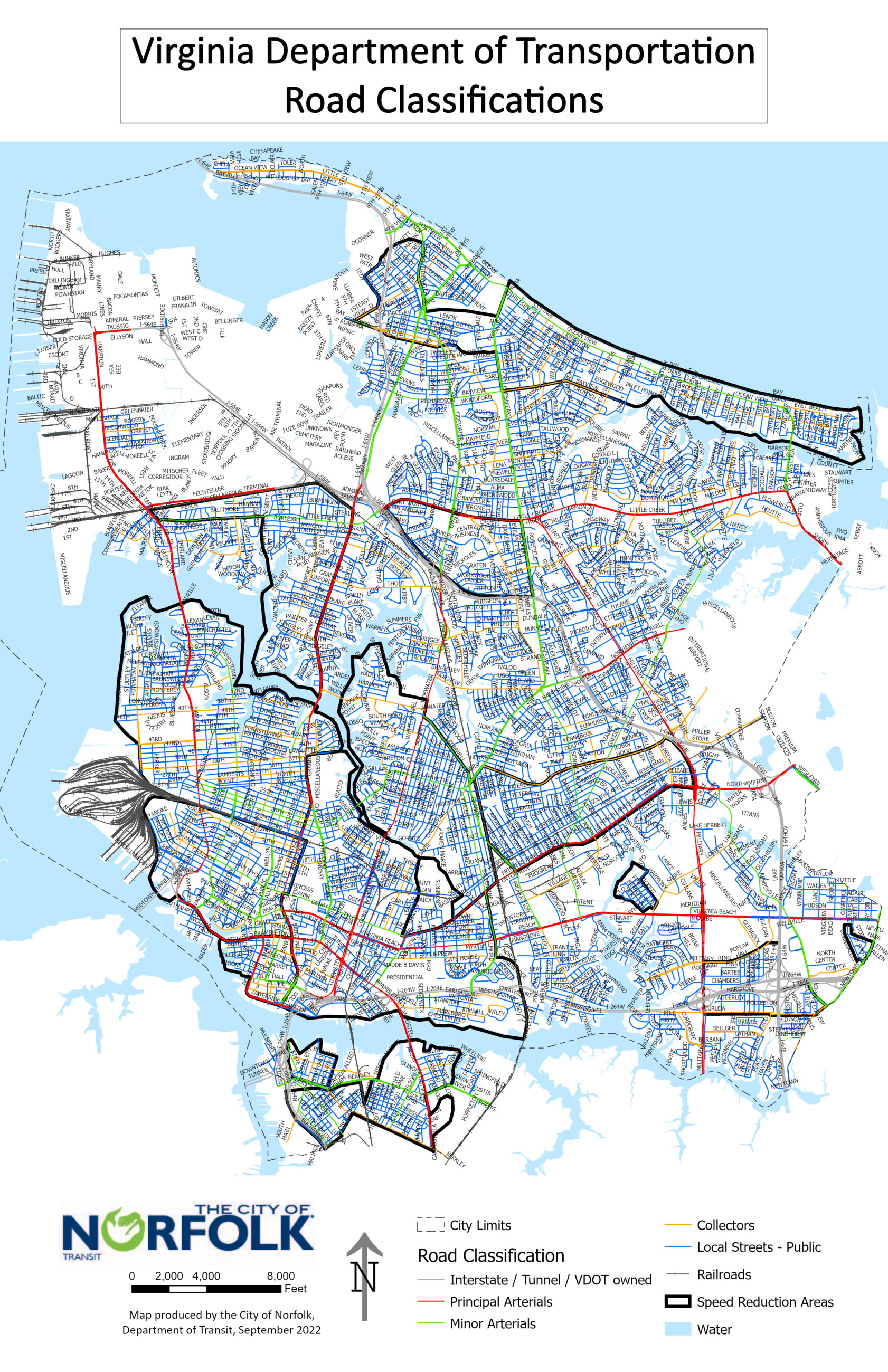 The Southside will be the first area in Norfolk to see the new 20mph speed limit signs posted on local/neighborhood streets. This will include the following neighborhoods: Berkley, Campostella, Campostella Heights, Diggs Town, and Oak Leaf Forest. Signs were updated and installed the week of November 8th, 2021.

The Department of Transit staff will work with civic leagues as we seek to advance the program into neighborhoods throughout the city.